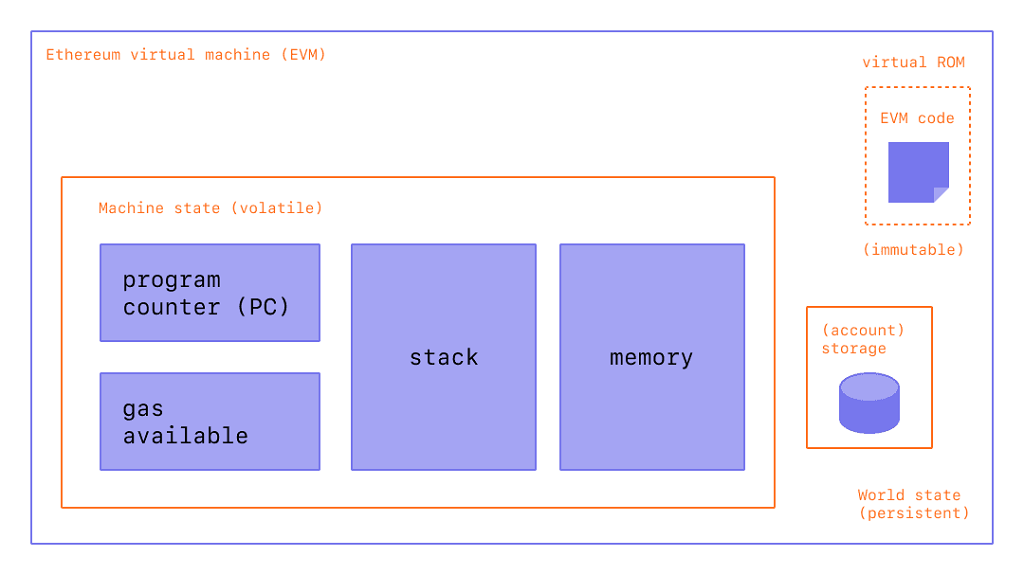 Before we discuss EVM, it is helpful to understand what a distributed ledger is and what it means for blockchain technology. Blockchains are decentralized platforms that use fundamental tools of cryptography to ensure the integrity of transactions. Bitcoin, for example, behaves like a normal currency, with the exception that a given Bitcoin address cannot spend more than it has received. To understand how blockchain technology works, we need to know how cryptocurrency functions.

Ethereum’s virtual machine (EVM) executes smart contracts in a stack machine with a depth of 1024 items. Each item represents a 256-bit word, and the machine maintains transient memory, which is not persistent across transactions. Contracts also contain a Merkle Patricia storage trie, which is associated with an account in question. This data is used to execute operations on the blockchain.

To deploy a smart contract, it must have a contract address. Smart contracts use a combination of query and invoke transactions to execute. A sample contract has two functions: one function calls the other, and each has its own hash value. Invoking a contract executes it in the Remix IDE. Each transaction calls the contract address to execute the function. The hash value of each function is then concatenated with the required arguments.

Ethereum is a public blockchain platform with smart contract functionality that enables developers to build and run distributed applications. It also has its own native token, Ether. Ethereum uses a distributed network of decentralized nodes, known as the “Ethereum Virtual Machine,” which is a type of computer that’s considered Turing complete. These nodes operate on the Ethereum blockchain and maintain a decentralized database. Instead of traditional servers, each node has its own Ethereum Virtual Machine, which runs the same instructions.

The Ethereum Virtual Machine, or EVM, allows anyone to execute code using a decentralized network of nodes. The EVM utilizes the computing power of all participants in the network to execute smart contracts. This allows anyone to create a program and run it in a trustless manner, while guaranteeing the outcome of the execution through smart contracts. While the Ethereum Virtual Machine isn’t a fully decentralized platform, it’s the backbone of Ethereum, the platform’s decentralized ecosystem has many uses.

Ethereum is a blockchain with the EVM running on it. Its main purpose is to run smart contracts. These contracts are written in a language called Solidity and converted to opcodes to be executed by the EVM. The EVM acts like a decentralized master computer and completes tasks on the blockchain. To perform a transaction, a smart contract must contain an initialization fee and an end-of-blockchain gas payment.

Ethereum has many advantages. For example, it allows developers to use smart contracts. A smart contract is a piece of code that runs on an Ethereum server. In addition, the virtual machine is completely isolated, and code that runs in it does not have access to the network or file system. Additionally, there are two types of accounts on the Ethereum network: EOAs and Contract Accounts. Both are treated equally by the Ethereum protocol.

EVM is an acronym for Extremely Virtual Machine. A virtual machine can execute any software on a different computer system. It simulates the way that a CPU operates. For example, an Apple Mac computer can emulate a Windows operating system. Linux operators can run Windows software. The concept behind EVM is somewhat similar to that of Turing machines. However, EVMs are more flexible than these machines. They are designed to run different types of applications in one environment.

Ethereum uses the EVM to power decentralized apps. The virtual machine is a decentralized version of a computer. Its users can create markets, file sharing economies, new infrastructures for finance, and trustless interactions. This allows people to build decentralized applications and smart contracts that can interact with one another and the world. The blockchain also supports Ethereum virtual machines, which is used to process transactions. The network’s developers are building apps that work across many different platforms, including the blockchain.

The Ethereum Virtual Machine (EVM) is an application that executes smart contracts. Each smart contract contains a message, code, and other parameters that are associated with execution. This bytecode is split into many bytes during execution. Bytes in the range of 0x60-0x7f are referred to as push data, which must be attached to an opcode in order for it to execute.

The gas unit is used to pay miners for performing important tasks on the Ethereum network. For this reason, every time a transaction is performed, it costs three gas. If a user performs this operation a thousand times, it will cost three thousand gas. The gas price fluctuates based on the availability of processing power. If this transaction fee is very low, miners may ignore the transaction. However, the gas price is relatively low, making it difficult to determine the value of a particular transaction.